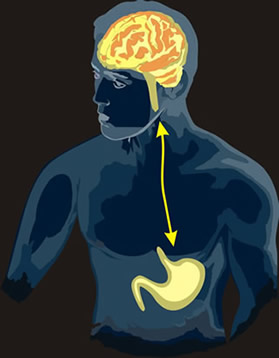 Ever get a gut feeling and wonder how you are feeling something in your gut? What about butterflies in your stomach? Isn’t the gut supposed to be for digestion, what is it doing feeling emotions? The gut and the brain are highly connected. In fact, the brain and the gut come from the same cell line in embryo development and separate but stay attached through the vagus nerve and are able to communicate. Of the nerve fibers connecting the two, 70% of them go from the gut to the brain instead of the other way around. The gut has its own nervous system called the enteric nervous system (ENS) that communicates with the brain through the autonomic nervous system (ANS). Both the brain and the gut produce neurotransmitters. The brain produces around 100 different neurotransmitters, and the gut produces 40 of the same ones. Serotonin, the feel good neurotransmitter, is found in both, but 90-95% of its production is in the gut, not the brain. Dopamine, another major neurotransmitter, has 50% of its production in the gut and the other 50% in the brain. It is easy to see the implication of having a happy gut to support a happy mind and vice versa.

Serotonin is a major neurotransmitter that, in the gut, is responsible for how much mucus is secreted in our intestines and our perception of abdominal pain or fullness. Serotonin plays a key role in our bowel motility; if there is not enough, we get constipation, too much causes diarrhea. Even further saturation of the gut with serotonin causes it to go into the bloodstream where it can cause vomiting. Systemically serotonin is for preventing depression, regulating sleep, body temperature, repairing damaged cells in the liver and lungs, normal heart development, and regulating bone density by inhibiting bone formation. Additionally, serotonin is important for the proper development of the ENS itself. It is a vicious circle if we do not have proper levels of serotonin as it furthers the decrease in serotonin by a damaged ENS that normally makes more serotonin. 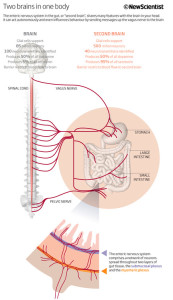 You might now be asking, how do I get more serotonin? An easy way is through food. The foods with the highest concentration include: walnut, plantain, pineapple, banana, kiwi, plum, and tomato– all high in carbohydrates. This is why when we are under stress or emotional we crave high carbohydrate meals for the more immediate effect of the serotonin release. While this is great for an immediate local gastrointestinal effect there is much more to serotonin levels than this. Serotonin can also be made in the body from a protein building block, an amino acid, tryptophan. The foods that have high levels of tryptophan tend to have higher protein levels that allow for balancing of blood sugar and slower, more even production of serotonin. High tryptophan foods include: turkey, bananas, milk, yogurt, eggs, meat, nuts, beans, fish and swiss and cheddar cheese. It is advantageous to control our impulses when we are feeling the need for serotonin through carbohydrates. Too much serotonin at once can lower the sensitivity of the receptors to the serotonin over time requiring  more carbohydrates for the same “good feeling”. The sudden rush of carbohydrates also leads to a crash afterwards not only of serotonin, but also of our blood sugar levels. Choosing meals or snacks high in protein with high levels of tryptophan are your best bet for an uplifted, good mood and stable energy level.

Serotonin is crucial to an overall feeling of well-being. This has been seen in dieters who cut out carbohydrates from their diet.  Often, about 2 weeks in, they have decreased their stores of serotonin and begin to feel depressed. Part of this process is the body readjusting and re-sensitizing itself to a well-balanced level of serotonin. Fortunately, for those avoiding high carbohydrate, serotonin filled foods, tryptophan is more protein dense. It is important to  to continue to eat foods high in tryptophan as they also pack  important co-factors in the conversion process. It is theorized that while the brain and the gut communicate through nerves and other signals impacted by the serotonin and other neurotransmitters in the gut, the serotonin produced in the gut does not make it past the blood brain barrier to be able to work directly on the brain. In fact, if the amount of serotonin in the gut was to be introduced to the brain, it would greatly overwhelm the receptors of the brain and desensitize them. Therefore, we need to provide the body with the nutrients needed for the brain to make its own supply of serotonin. Thiamine, a B vitamin, and folic acid are both crucial in our diets. It is also essential that we have a healthy gut  so we are able to absorb our nutrients.  If the gut is unhealthy due to intestinal distress or damage, we will not have the materials needed for serotonin, dopamine and the other 38 neurotransmitters found in the gut.

Genetics can play a role too. Commonly, there can be a small genetic change in the methylenetetrahydrofolate reductase (MTHFR) gene that decreases a person’s ability to put folic acid into its active form. These individuals with MTHFR alterations, especially with A1298C, have difficulty with mood regulation as they are limited in their ability to convert tryptophan and tyrosine into serotonin and dopamine. It is important to know if you are one of these individuals who have an altered ability to make activated folate for your overall mind and gut health.

The role of serotonin in depression and mood regulation is so pivotal that it is the number one target of the largest drug class for anti-depressants. Selective serotonin re-uptake inhibitors (SSRI’s) are frequently used in depression and work by inhibiting the breakdown of serotonin so that more serotonin continues to be available for receptors to use. The most common side effects of SSRI’s are nausea, diarrhea and nervousness, which are all issues associated with improper levels of serotonin.

There are many other neurotransmitters in the intestines beyond serotonin. Dopamine in the brain is associated with pleasure and the reward feedback system. In the gut it works by messaging between neurons causing contractions, which lead to bowel movements. Parkinson’s disease, a problem with movement and muscle control is known to be correlated to lewy bodies damaging the brain and decreasing the dopamine-producing cells in the brain. However, recent studies at Heiko Braak at the University of Frankfurt, Germany have found the same lewy bodies causing damage in the gut, and may even originate  in the gut going to the brain.

Oxytocin, our nurturing hormone, produced during labor and during breastfeeding, has been found to support the development of neurons in our intestines. This might explain why premature babies who are not breastfed are at higher risk of developing diarrhea and necrotizing enterocolitis, in which portions of the bowel become inflamed and die. The gut, with the enteric nervous system connected to the brain through the nerves of the autonomic nervous system, have even been associated in Alzheimer’s. The infamous plaques or tangles found in the brains of those with Alzheimer’s have also been found in the neurons of their intestines.

You now know the importance of serotonin and where to get it in your diet, but there are plenty of other ways to support serotonin levels. Sleep and serotonin go hand and hand. Melatonin, a neurotransmitter that increases at night to help you fall asleep, is made from serotonin. Without adequate serotonin, there will be decreased melatonin and impaired sleep. Furthermore, without proper consistent sleep, the body desensitizes to serotonin and alters our brain’s response to serotonin in general. Studies have even shown that decreases in serotonin levels can lead to sleep apnea and other sleep problems.

While a crummy mood may be caused by imbalanced serotonin levels, we can directly impact our serotonin levels by the actions we take. Activities that boost our outlook such as meditation, relaxation techniques, talking to friends and counseling have all been shown to increase our circulating levels of serotonin. Exercise is another fantastic way to regulate serotonin and has even been shown to help regenerate damaged neurons. Additionally, it helps to curb hunger and carbohydrate cravings while also helping to manage the stress causing the cravings.

This all being said, without the proper nutrients to make serotonin, the effects of these factors will be limited. It is critical to have a healthy diet and digestion to have a happy, serotonin filled gut. Without proper digestion, simulation and absorption of our food, or elimination of toxins and waste products, our ability to make and maintain serotonin levels is impaired. We at Vital Kids Medicine, can help you navigate your serotonin journey by improving gut function, digestion and absorption. We can also test you for your ability to convert folic acid to its active form to be used in serotonin production and support your body to function optimally if not. We can help you be and feel the greatest you have in years.